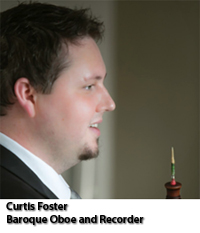 A ravenous chamber musician, Curtis has performed with small ensembles in concert from San Francisco to Dubai, including regular appearances with his Seattle-based chamber groups, sound|counterpoint and the Così Quartet. Mr. Foster is also an enthusiastic advocate for music of our own time, and regularly commissions and premiers new works by contemporary composers for old instruments. A dedicated pedagogue, Curtis teaches Baroque oboe as part of the Baroque Orchestra Mentorship Programme at the University of British Columbia, and is regularly invited to teach workshops and masterclasses around the US and Canada. His recordings can be heard on ATMA Classique, Naxos, Cedille Records, and IU Press.

Originally hailing from Wichita, Kansas, Curtis now makes his home in beautiful Bellingham, Washington. In his rare downtime, he enjoys exploring the many hidden corners of his adopted Pacific Northwest with husband, composer Adam Haws, and cuddling with their spunky cats, Tamino and Lobo. He is a graduate of Wichita State University and Indiana University’s Early Music Institute.