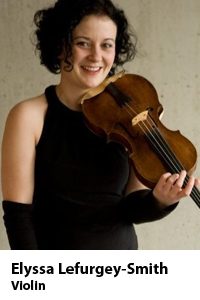 Since moving to Victoria, BC in 2016 to be closer to family, she has become a member of both Victoria Baroque and Pacific Baroque Orchestra and has been invited as a regular guest director of Per Sonatori baroque ensemble in Regina.

She has toured internationally for performances in Russia, Australia, France, Ireland and Italy.  Most recently she completed a tour and recording with the Pacific Baroque Orchestra including performances in Toronto, Ottawa, Montreal and the Boston Early Music Festival.

In addition to performing, Elyssa is an enthusiastic and passionate educator and has been involved in teaching, coaching and program development for over 15 years.  Most recently she has joined forces with Victoria Baroque in founding “Petit Baroque” orchestral training program for advanced string students to explore early music style on period instruments.  Elyssa greatly enjoys teaching at her private music studio, Silver Bow Studio.