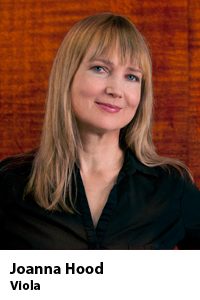 Violist, Joanna Hood is an avid chamber music player both in modern and period styles.  She is a founding member of the Lafayette String Quartet, formed in 1986 and based at the University of Victoria. She is the violist of the Historically informed performance groups, The Loma Mar Quartet, founded in 1997 and the DNA Quintet formed in 2008, both based in New York.  Their first recording of the newly discovered chamber works of Domenico Dragonetti won the prestigious Classical Recording Foundation Award in 2009.

She plays on a viola labeled Johan Samuel Fritsche, 1805, and a viola by Edmond Aireton, 1754.

Joanna has recorded for the EMI, Tzadik, Dorian, CBC, Adlar, and Vervue labels.