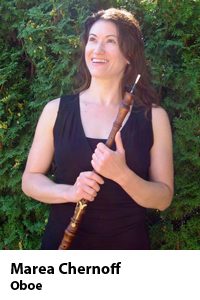 After a fifteen year career as a freelancer, avid chamber musician and dedicated educator on the modern oboe, Marea decided to also pursue her love of Baroque music and take up the Baroque oboe to become involved in historical performance.

She has attended the International Baroque Institute at Longy in Boston and the American Bach Soloists Academy in San Francisco.

Marea performs with the Victoria Baroque Players and has performed with Early Music Vancouver, Early Music Alberta and various other groups.  She is a coach and member of the University of British Columbia’s Baroque Orchestra Mentorship Program.

Marea now performs professionally on both modern and Baroque oboe.