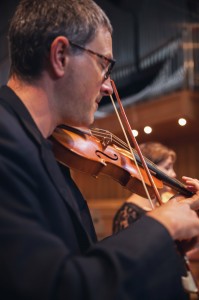 Paul Luchkow is a versatile violinist and violist whose activities cover the range of music from the 17th Century to the present day, on modern and period instruments. A regular feature of Western Canada’s Early Music scene, Paul is a long-time member of the Pacific Baroque Orchestra and appears frequently in concerts for Early Music Vancouver. At home on Vancouver Island, he performs regularly with Victoria Baroque, Victoria Symphony, the Early Music Society of the Islands, as well as at Victoria’s Pacific Baroque Festival.

A highlight of recent years has been his work with fortepianist Michael Jarvis and their exploration of Classical and Romantic sonata repertoire on period instruments. Their latest recording – Trios for violin, viola da gamba, and fortepiano by Tommaso Giordani with the British gambist, Sam Stadlen, was released on the Marquis Classics label in the Fall of 2020.

As a recording engineer for 15 years Paul has made concert and CD recordings for many of the important small and medium sized ensembles on Canada’s west coast, including Redshift Music Society (Jordan Nobles 2017 JUNO winning Classical Composition of the Year), Emily Carr String Quartet, Victoria Baroque, the Luchkow-Jarvis Duo, and the Luchkow Stadlen Jarvis Trio. In the past year Paul has been working closely with organizations like Music for the Pause, The Victoria Symphony, and Pacific Opera Victoria, recording for their numerous online offerings.