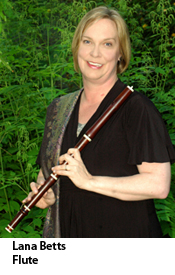 Lana Betts enjoys a musical career as a performer on historical and modern flutes and also as a practitioner of the Choral Art.

She graduated from McGill University’s music program, going on to perform as a recitalist, chamber musician, and with large ensembles across Canada and abroad, four years of which she spent teaching and performing in Iceland.

Wearing her choral directing hat, Lana also directs a community choir has acted as Director of the Victoria Conservatory of Music’s Summer Piano Academy Choir among others.

She delights in playing with Victoria Baroque.