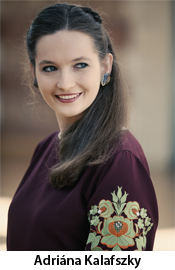 The Hungarian soprano Adriána Kalafszky started her musical studies with the flute. As the member and soloist of the Hungarian Radio Children’s Choir and the Angelica Girls’ Choir she took part in many concerts and tours throughout Europe and Japan from an early age.

Recently she has sung the roles of Venus (John Blow: Venus and Adonis) in 2015 at the Alte Musik Fest Leipzig (leading: Prof. Susanne Scholz) and the role of the Fairy Queen in Purcell’s Fairy Queen in 2016, Tokaj, Hungary.

Adriána works permanently with conductor György Vashegyi in Budapest (Purcell Choir and Orfeo Orchestra). She sung many Hungarian premieres and is the soloist of the ensemble’s coming CD recording. Singer of the Ariadné Consort and Budapest Bach Consort. In 2017 she won the 3rd prize with her ensemble in the “La Stravaganza” early music competition in Romania.

In 2017 she won the Fischer Annie scholarship. 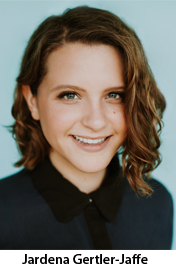 Hailed for her rich, full sound, Jardena Gertler-Jaffe is a young mezzo soprano from Saskatoon, Saskatchewan. At the University of Toronto, Jardena completed a BMus in Vocal Performance (2015) and an MA in Ethnomusicology (2017). She is also an alumna of celebrated training programs SongFest and Opera NUOVA.

Her past voice teachers include Monica Whicher and Patrick Raftery, and she is currently studying with Nancy Argenta and Ingrid Attrot in Victoria.

As a studied performer of Baroque style and repertoire, she has appeared as a soloist with the Okanagan Festival Singers, Cor Unum Ensemble, and Toronto’s Schola Cantorum and Theatre of Early Music.

Jardena is looking forward to a busy spring, singing the roles of Dorabella in Mozart’s Cosi fan tutte (Victoria Conservatory of Music) and Molly/ Nephthys/ Tahemet in Dean Burry’s Isis and the Seven Scorpions (Saskatoon Opera).

Jardena’s recent credits include the roles of Hansel in Hansel and Gretel with Saskatoon Opera’s school tour, Israelitish Man in Judas Maccabaeaus at the Victoria Conservatory of Music, and Sorceress in Dido and Aeneas, conducted by countertenor Daniel Taylor.