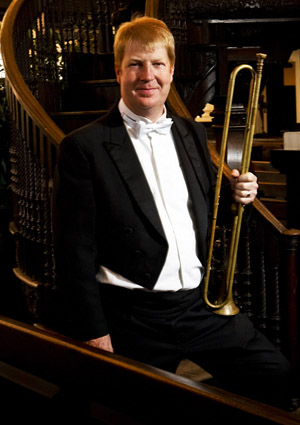 David took up the trumpet aged nine following in the footsteps of his grandfather who was a bandmaster in the North East. He joined the Leicestershire Schools Symphony Orchestra and went on to study at the Royal College of Music with Michael Laird.

During this time he performed extensively at major concert venues throughout the world and took part in numerous recordings for CD, radio, TV and video.

In 1993 he formed the groundbreaking group Blackadder Brass which quickly became the resident educational ensemble at Symphony Hall in Birmingham, playing to over 40,000 children in its first three years. He is also a professor at Birmingham Conservatoire.

David is also principal trumpet with the Orchestra of the Age of Enlightenment and is renowned as a soloist having performed and recorded many of the great trumpet masterpieces with conductors such as Sir Simon Rattle, Sir Roger Norrington, Franz Brüggen, Vladimir Jurowski and Stephen Cleobury. He has performed the Haydn Trumpet Concerto to great acclaim at major venues across Europe including at the Edinburgh festival, Kings College Chapel and the Esterhazy Palace in Hungary.

His recordings of Handel arias with singers such as Reneé Fleming, Kiri Te Kanawa and Elin Manahan -Thomas have received particular critical acclaim and he has also recorded the second Brandenburg Concerto three times, most notably with Trevor Pinnock, in a recording that received the best Baroque instrumental award at the 2008 Gramophone Awards.