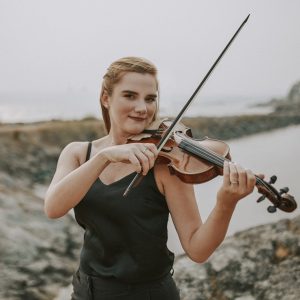 Originally from Windsor, Ontario, Kathryn is an active & versatile freelance violinist and educator on Vancouver Island. Her passionate and intuitive musicianship has brought her the opportunity to perform with distinguished ensembles around Canada and the USA, including Victoria Symphony, Paciﬁc Baroque Orchestra, Victoria Baroque Players, Windsor Symphony Orchestra, Orchestra London.

After much success in local musical competitions, she furthered her study and love of music at University of Toronto and University of Michigan under the instruction of Yehonatan Berick as a merit scholar. During this time, She served as concertmaster in University of Toronto Symphony Orchestra, and began her training in historical performance practice.

Over the years, she has brought her talent various training institutes, including the Berwick Academy at the Oregon Bach Festival, Brott Music Festival, Tafelmusik Baroque Summer Institute, Domaine Forget, and Interlochen Centre for the Arts.

Currently, she is the founder, creative director, and avid arranger of Cascadia Quartet & ensembles, and has been hired as arranger for a number of artistic projects all over Canada, including an opera that was performed at the Edinburgh Fringe Festival.  As an educator, Kathryn is a private, group, & orchestral ensemble instructor to budding young violinists and pianists as young as three years old, up to all ages. She is an instructor at Taber Music School, Kwum Kwum Lelum at Songhees First Nations Reserve, Sooke Harmony Project, and the Sooke String Orchestra. She is eager to show students the joy of music through nurturing musicianship in each of them. Kathryn is especially thankful for the numerous mentors and teachers that have helped nuture her craft, both in modern and baroque violin, including Lillian Scheirich, The Paciﬁca Quartet, Katheryn Votapek, The Gryphon Trio, Jeanne Lamon, Marc Destrubé, & Robert Mealy, to name a few.