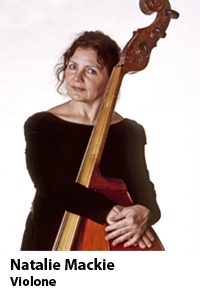 Natalie Mackie studied cello at the Conservatoire de Musique (Québec), followed by a degree from the School of Music, University of British Columbia. While at UBC she was introduced to the viola da gamba, and following graduation, she pursued further studies at the Koninklijk Conservatorium in The Hague.

Natalie is a member of Pacific Baroque Orchestra and the chamber ensemble “La Modestine”- both Vancouver-based ensembles.

She has toured throughout Canada, Europe, and the US and recorded for Radio France, German Radio, BBC, CBC, and NPR, as well as the Canadian label Atma Classique.

Natalie is a regular performer in the Pacific Baroque Festival, held annually in Victoria, BC, and teaches in the Baroque Orchestra Mentorship Program at the University of British Columbia.