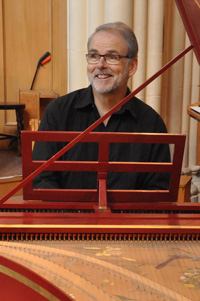 Our dear colleague and collaborator, harpsichordist Michael Jarvis, passed away on Christmas Day 2020, much too early at the age of 62.

A virtuoso at the harpsichord, organ, and fortepiano, he performed regularly with the Victoria Baroque, Early Music Vancouver, and Pacific Baroque Festival, and was music director of St. Barnabas Anglican Church on Begbie Street, Artistic Director of the Bach on the Rock Music Society on Salt Spring Island, and the mastermind behind the Luchkow-Jarvis duo’s concerts and recording projects.

An immensely talented musician, Michael brought great amounts of knowledge, beauty, and fabulous wit to our musical and personal interactions and to the music community.

R.I.P. Michael: We will greatly miss you!

Michael Jarvis has been acclaimed as one of Canada’s finest harpsichordists, fortepianists and continuo players. He has performed across Canada, the USA, England, Italy and Bermuda. He has worked with many of Canada’s finest singers and is in demand as a coach and collaborative artist.

He has performed with many of Canada’s orchestras, chamber ensembles, and summer festivals. He has recorded for the Hungaroton, Marquis Classics, ATMA, Naxos, Solitudes and Avalon CD labels, and has many times broadcast nationally and regionally for the CBC, as well as across the U.S. on NPR. His performing editions of 17th and 18th century choral and organ music are published by GIA, Chicago.

He was also co-host and star of the 13-part Bravo/Vision television series “Come into the Parlour”. Featuring co-host and star Carolyn Sinclair, soprano, and their original 1857 Chickering square grand, the series featured as guest artistes some of Canada’s finest musicians. Michael was also featured on two national Canadian television specials “A Baroque Christmas” and “A Baroque Easter” on Vision and Bravo-tv.

His CD on the Marquis Classics label of J.N. Hummel’s Sonatas for Fortepiano and Violin/Viola, Op. 5, with violinist Paul Luchkow, and performed on an original Viennese fortepiano from c.1800 was finalist in the Western Canadian Music Awards Classical Album of the Year. His and Paul’s newest CD for Marquis, Michel Corrette’s Sonatas for Harpsichord and Violin, op. 25 [1743] on mythological themes is currently in post-production and will be available early 2017.

“Jarvis has an awesome technique that produces music of enormous style and crystal clarity . . . the contours of the music are never even blurred, but emerge with a coherence and persuasiveness that is remarkable.” The Hamilton Spectator (Canada)